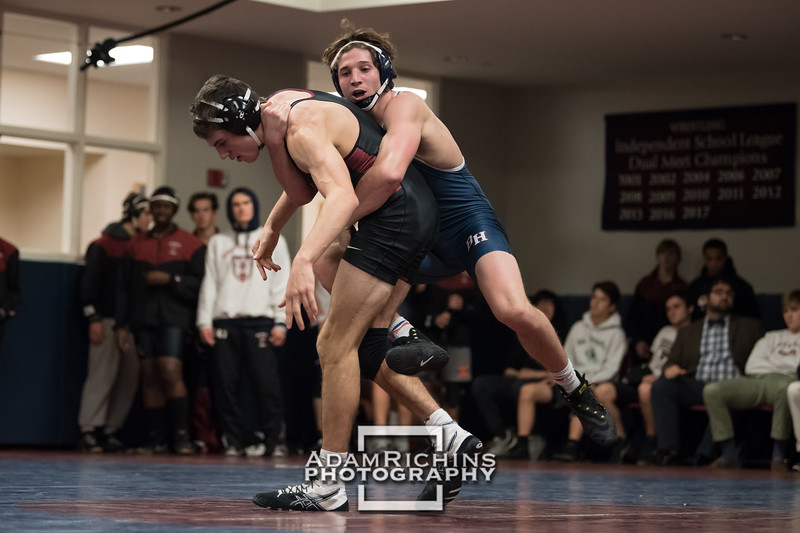 “We’ve got a ton of new guys on the team. Everyone is working hard. Excited to see improvement and success!” – Seth Israel ’18

Eager to get some early-season competition under their belts, this year the team sent a dominant crew of five veteran wrestlers to the Caruso Tournament in Newark, New Jersey. An annual tradition for the varsity program, Caruso provides Belmont Hill wrestlers an opportunity to wrestle with the nation’s best prep-school squads — from perennial powerhouse Wyoming Seminary to Coach Leonardis’ alma mater, Blair Academy. Indicative of the talent and strength of the program’s top wrestlers, three Belmont boys placed at Caruso — Shapiro and Israel at 4th and Pontone in 2nd.

“We came out of the gates strong this weekend.” – Colin Vallis ’19

This year also marked a first for the varsity team. Leveraging Dr. Davis’ past experiences coaching in Connecticut, Belmont Hill sent nearly a dozen wrestlers to the Hopkins School in New Haven to compete in their annual Rumble on the Hill. With five starters at Caruso and no age-restrictions at the tournament, the team called on two middle school wrestlers to join the Connecticut crew — Adam Figler ’22 and Daniel Bittner ’22. Unfazed by the older competition, the second formers wrestled to an impressive second and third place, respectively. Following remarkable performances from the entire team — including a first-place finish for six-year veteran Billy Weldon ’18 — Belmont Hill left their inaugural Rumble on the Hill having secured an overall second-place finish.

Early regular season competition has been just as successful for the program. Handily defeating Governor’s Academy (66-16), Portsmouth Abbey (56-9), Deerfield (72-6), and Worcester Academy (65-12), the team has dominated both the ISL dual-meet circuit and broader NEPSAC field. Still, the team recognizes the dangers of complacency that often plague a seasoned program. Mindful of the competitive ISL and New England teams that the squad will face this season — including Roxbury Latin, Phillips Exeter, and Northfield Mount Hermon — the Belmont has embraced the challenge with excitement and determination. A program renowned for its historic success, the 2017-2018 season poses a legendary opportunity for the team. With aspirations for multiple all-Americans (a feat yet to be accomplished in a single season), several New England finalists, and a repossession of a team New England title, Belmont Hill holds itself to a high standard. Nevertheless, with strong dual-meet and tournament performance, the team unquestionably has the dedication, experience, courage, and heart to make these goals a reality.