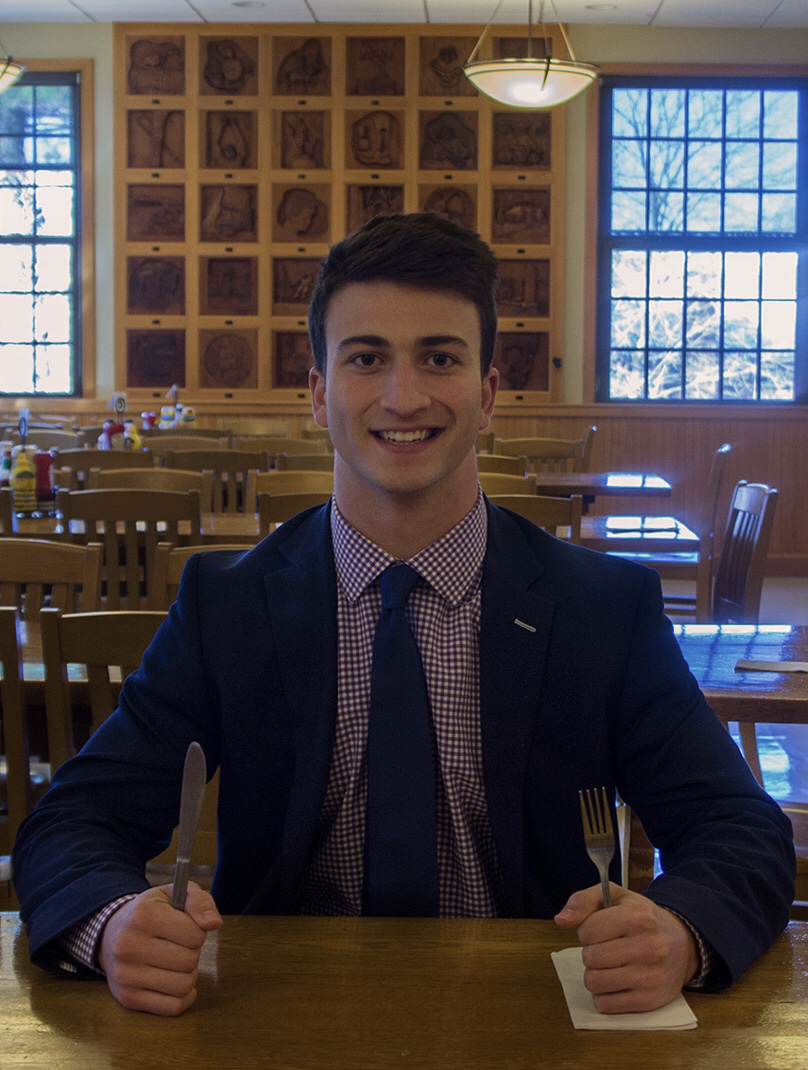 On Monday, April 9th, 2018, the Class of 2019 elected unopposed candidate Shane Rockett as the Belmont Hill School president for next year. Though a perpetually jovial presence around campus, Shane has had a serious impact on Belmont Hill’s student senate as well as the community as a whole. From a public speaking requirement for seniors, which he thankfully postponed until the Class of 2020, to Thursday morning weight room sessions, he has pumped out quality school policy during his four years as a class president. Among these achievements, however, none are more notable than his efforts to improve the Belmont Hill dining experience.

Started in the winter of his fourth form year, Shane Rockett’s initiative to improve lunches began out of recognition of students’ general dissatisfaction with food on campus. In a recent interview which I had with Rockett, he candidly stated, “With respect to the food staff themselves, I don’t think the food service here is very good. Out of the complaints, suggestions I got from the grade, that was definitely the most prevalent, so it was just my responsibility to do something about it and so the food survey was the manifestation of that.” Thus, as a fed-up student body called for change, a young and eager Rockett attempted to enact that change single-handedly through a simple and democratic solution. With a quickness of reform which even FDR would envy, a fitting trait for a history buff who spends most of his time in Mr. Smith’s classroom, he introduced the food surveys which would soon become iconic in the BH community. Unbeholden to the approval of the Senate or a teacher, Rockett immediately began to meticulously record the contents of every day’s lunch, which he would then typically aggregate into surveys which asked students to rate the meals on a scale of 1-5. After the results of such surveys had been tallied, Rockett would share them with head chef Denis Gagne, who says he applies the feedback to the upcoming menu two weeks later. An ambitious but pensive leader, Rockett set realistic expectations for his project: “I want the food service, the food staff to know which meals are popular and which meals are not…..this is an empirical way to measure how people feel about the food, each specific meal.” Over the course of nearly two years, his mission has garnered overwhelming popularity, leading others to take up the cause alongside him. By the vice-presidential elections for the Class of 2019 last week, improving Belmont Hill’s dining experience had become a necessary element of the platform for any Senate hopefuls, with all four candidates mentioning it frequently in their speeches. While Shane Rockett’s lunch surveys are clearly well intentioned and well supported, however, the question remains: have they actually achieved what they set out to do?

After an astounding number of surveys, twelve in 2018 alone, it seems that they have achieved moderate success. Visibly, Denis Gagne’s public support for the surveys as well as the phasing out of Taco Tuesdays, which Shane Rockett touted as his crowning achievement in his presidential speech, serve as prime examples of progress towards better lunches and greater acknowledgment of students’ likes and dislikes. From conversations with my classmates, I have also witnessed a growing contentment with BH food and Dennis Gagne, a likely indicator that the surveys are doing their job. Nevertheless, almost every lunch assuredly leaves some students unsatisfied and many asking what more they can do.

For students and faculty, the answer is not much. With an average of 195.42 responses per survey in 2018, Shane Rockett collects comments on school lunches from a large portion of the student and faculty body. And he is satisfied with that outcome: “We are getting enough responses….and on top of that, everyone has been really mature and really responsible about not writing anything goofy.” The sad truth remains, however, that over half the school can’t find time to fill out a two-minute questionnaire; before writing this article, I was even one of those people. But, as I have come to recognize and appreciate more and more, the lunch surveys are of vital importance. They uniquely serve not only as an outlet for the frustrations for boys at BH but as one of few activities on campus (other than Junto) which hinge directly and almost solely on those students. Both Rockett and Gagne are aware of the role of the student in their reforms and want to see greater contributions. Just as Rockett says that “it would always be better to get more [responses],” Gagne also affirms, “Foremost, keep the communication coming.”

Though this may be a shock to many students skeptical of the kitchen staff, they too bear little to no fault in the failings of the surveys. Not only does Dennis Gagne admire Shane Rockett’s efforts, but he strives to aid them in any way he can. In my recent email correspondence with him, he thoughtfully writes, “The end goal is to make everyone as happy as possible while keeping a variety of foods on the plate. So that’s been a journey. I’ve been here now four years and we have worked to add a quality to the program that we felt was really important. We have transitioned to a more of scratch cooking process while adjusting depending on student feedback.” Among other things, Gagne cites a return to the classic BH popcorn chicken and the addition of a milk station as examples of his consideration and application of student feedback. Shane also seems to think that Gagne is listening to the criticism: “I would say they have been appreciative, they have been grateful. I think it’s a given that this helps them. It gives them an easy way to know which meals are good” But if neither the students nor the kitchen staff has significantly hindered the achievements from the lunch surveys, what has?

Unfortunately, it is perhaps the two aspects of life at Belmont Hill over which students have the least influence: tradition and the school budget. In our aforementioned interview, Shane Rockett points out these limitations to me: “I recognize that we do have limitations with our sit down lunches and two lunch periods, the fact that for two times during the day an entire set of meals has to be prepared and then ready to eat at that moment as opposed to a rolling lunch system….if I controlled everything, which I absolutely don’t, I would put more money into school lunches. Follow up question is where would that money come from? I don’t know. That’s the problem….That’s a bigger question than me.” When asked if he would abolish family style lunches given the choice, Rockett answered with a resounding no: “I think sit down lunches are a valuable part of the Belmont Hill experience. I know for some people they don’t like the whole part of that part, but it’s a good chance to meet other students, to talk to your teachers and, again, it does set us apart from other schools. I think we need to find a better way to work with that system.” Denis Gagne, however, would argue differently, noting “the challenges a family style set up presents” as restricting factor with regards to his goal “to give students a variety of options during their lunch.” And it seems that Belmont Hill may be trending towards Gagne’s sentiment. On April 17, 2018, Colin Braun ‘19, one of the heads of the Belmont Hill Sustainability club, with permission from Mr. Bradley and the kitchen staff, implemented a new structure for lunch, which combines the seating of family style with food retrieval of walkthroughs. An ardent supporter of walkthrough lunches every day for their greater sustainability, Braun represents a burgeoning wave of students moving away from the hallowed customs of the past and towards a more efficient future for lunches. Ultimately, however, both issues go straight to the top of the Belmont Hill administration, which Rockett says does not place an emphasis on lunches, and one can only wait for and anticipate those authority figures to make adjustments to the flawed lunch system. Hopefully, they will come to understand the importance of satisfying lunches as Rockett has: “Belmont Hill is a school of athletes. It’s a school of academics and it’s a school of athletes, but every student is both by requirement. Nutrition is essential to athleticism. Without a doubt, the most important part of an athlete’s day is what he eats and how much he eats and so providing our students, our teammates with healthy, good food is paramount. It is one of the most important things that the school should do.”

Luckily, the Belmont Hill can definitively look forward to many other changes to come regarding its dining. One plan which both Shane Rockett and Denis Gagne are clearly excited about is the meal suggestion survey, which Rockett created on April 2, 2018. Unlike past surveys, which merely ask for evaluations of preexisting meals, the meal suggestions survey innovatively provides students with the opportunity to propose new meals. For a dining experience centered around a few core meals, like pasta, grilled cheese, and General Tso’s chicken, this undertaking represents a nice change of pace. Also near the forefront of Gagne’s mind is the food committee, which Abe Tolkoff ‘21 has worked to put together for next school year. Cooperate directly with the kitchen staff, the food committee will only further entwine the BH dining experience with the will of the students. It will be interesting to see whether Rockett’s recent election will allow him and others pushing for lunch reform to double down on their stance and maybe (finally) bring peace of mind to the culmination of generations of discontented Belmont Hill boys.