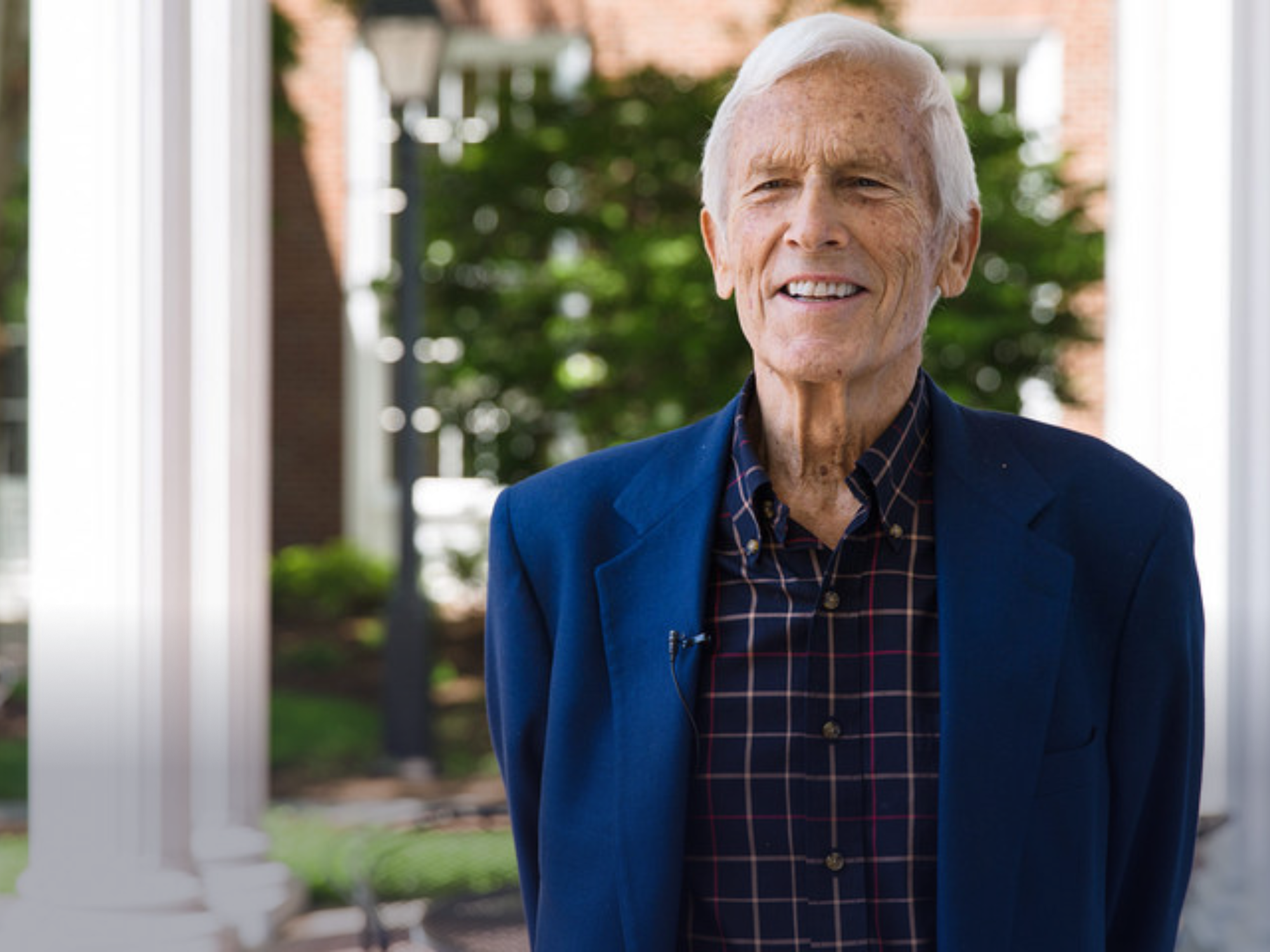 On a wet Tuesday afternoon in early April, Mr. Roger Webb spoke to an intimate group of interested community members on the reconstruction of Belmont Hill’s iconic Hamilton Chapel. Into his 80s but still thoughtful, sharp, and vibrant, Webb provided the attending cohort of middle schoolers, upper schoolers, faculty members, and alumni with an anecdotal recollection of the Hamilton Chapel’s assembly.

Mr. Webb’s knowledge of the Chapel is rivaled by none. Speaking on the stage of the Hamilton Chapel, Webb returned to the space that has come to embody his silent, but significant legacy on Belmont Hill. In 1963, it was Roger Webb who identified a wooden chapel in West Thompson, Connecticut that was nearing its destruction; the United States Army Corp of Engineers had purchased an abundance of property in the region and was preparing to demolish structures for the construction of a dam. Contacted by Headmaster Fred Hamilton, Webb, a general contractor with experience relocating historic structures in the Boston area, led a team of five carpenters that disassembled the chapel’s parts in West Thompson, transported them by truck to Belmont, and reassembled the once-Methodist church in its present location. The School continues to both symbolically and physically revolve around the Hamilton Chapel, roughly equidistant from the Melvoin Academic Center and Jordan Athletic Center.

Webb’s detailed retelling of the Chapel’s reconstruction was followed by an exciting trip to the attic of the Hamilton Chapel. Mrs. Hamilton, a faculty member for over twenty years, as well as all the boys present to meet with Mr. Webb, was making her first trip to the attic. A small door nested behind third form seating in the back of the building reveals a thin, steep set of wooden steps that lead to a long attic. Home to the Chapel’s original wooden podium, a gallery of photos from its 1963 disassembly and reconstruction on Belmont Hill, the structure’s weathervane, and a bird’s-eye view of the JV soccer field, the attic, unknown to most of the student population, was surprisingly well-kept. In the attic, Mr. Webb continued treating students to tales and narratives from his work on the project, pointing out pictures that depicted the community gathering around the Chapel as its two front columns were placed (an event that seemed to mimic the community’s groundbreaking ceremony when construction on the Melvoin Academic Center began in November 2013).

Webb’s visit in early April sparked our interest in his unique connection to the school’s history. After connecting with him through email, we set up a time to speak with him and found ourselves enjoying a 40-minute conversation with Mr. Webb on the phone a week later.

A graduate of Harvard College in 1958 and the Business School in 1961, Webb spent his first few months after school managing money for Liberty Mutual, a Boston-based insurance services group. “However,” Webb explained, “within a year-and-a-half, I realized that I wasn’t particularly happy where I was working – I wanted to find something on my own terms, something that would be more exciting than just investing money.”

Amidst galvanizing Cold War fears and tensions, Mr. Webb entered the workforce as the federal government continued to push for new nationwide public works and infrastructure projects. In 1962, six years after Eisenhower signed the colossal Federal Highway Act, Boston was a city undergoing dramatic change. Under Mayor John F. Collins, explained Mr. Webb, “the character of the city was transformed, and, in many cases, lost by the clearance of dozens of these city blocks.” With much of the city destined to be razed to make room for the sprawling urban infrastructure, Mr. Webb found his next business opportunity. Founding R.A.R.E. Enterprises (Restorers of Antique Real Estate), Webb began relocating these condemned buildings.

After moving nearly half a dozen buildings in Cambridge and Belmont (including Belmont Hill’s Chapel in 1963), Webb amassed a reputation of excellence and was asked to relocate nearly 30 buildings in Long Island. Following his time in New York, Mr. Webb returned to Boston in 1965, landing himself a major contract with Mayor Collins and the newly founded Boston Redevelopment Authority.
“By the time I returned to Boston,” Mr. Webb remarked, “the conscience of the city and the nation had realized that you have to leave some history behind – you can’t just tear it all down.” Founding the American Heritage Foundation, Mr. Webb thus sparked the preservation movement in Boston, spearheading the redevelopment of Quincy Market in 1966 and Old City Hall in 1968. As a result of these endeavors, Mr. Webb has been nationally recognized for his “influence on the development of the historic preservation movement in Boston and Massachusetts.” A recipient of the National Preservation Honor Award in 1990, Mr. Webb has also been awarded two lifetime achievement awards in preservation efforts: receiving his first in 1998 from the MA Historical Commission and second from the Boston Preservation Alliance in 2003.

The Search Continues: A Trip to the Archives

Following our insightful conversation with Mr. Webb, we couldn’t wait to unravel more of our Chapel’s history. Taking advantage of a free afternoon, we visited the Alumni House to see if the school’s Archives would provide any answers. Upon finding the section of the archives reserved for The Panel, we pulled out a large, broadsheet-sized book containing all the volumes from 1960 to 1964. After spending nearly half-an-hour thumbing through the issues and marvelling at the formality and eloquence of the publication’s prose (as well as some great action shots of Mr. Martin ‘65), we came across several articles about the Chapel and its construction.

The 1960s were undoubtedly a time of profound change for the young Belmont Hill School. As Headmaster Roger F. Duncan explains in The Story of Belmont Hill School: 1923-1973, a fascinating account detailing the school’s first fifty years:

“The decade (1960-1971) brought to Belmont Hill a sense of maturity which in the rush of its adolescence it had never developed.”

With the school striving to ensure the best facilities for its students, the decade heralded a surge of new buildings on campus. Nevertheless, these changes on campus did not come about easily: unanticipated costs often forced the school to think deeply about its priorities on campus.

Early in 1963, boys were provided much-needed space for lockers and gyms with the construction of new athletic facilities. While the Executive Committee had also voted that same year to build a new boathouse just upstream from Eliot Bridge, after witnessing the mounting costs of the gym project, they decided to shelve the boathouse endeavors (for the moment). Nevertheless, even with a Committee adamantly against starting any new construction projects on campus, Headmaster Charles F. Hamilton was keen to find a space that could accommodate his entire 300-person school.

The 125-year-old chapel, reported by The Panel in September 1963 to have been “constructed before the advent of mass-produced nails,” was thus disassembled into nearly 10,000 moving pieces and transported to Belmont. With the help of a group of Belmont Hill boys, Mr. Webb and his crew spent the summer and fall of 1963 reconstructing the building, which was completed early in the winter of 1963. Reconstruction was no simple task, as Mr. Webb had to recreate much of the interior work – like the plaster flowers in the corners of the ceilings – from scratch. Adding to the musicality of the building, the Claflin’s grand piano – originally meant for the old Shaler Chapel – was moved to the new Hamilton Chapel and Mr. Richard Bennett, the music teacher at the time, gifted the school an 1863 Odell Tracker Organ that he found in the Pilgrim Congregational Church in Harwichport. Finally, the basement was finished with a selection of panels as well as a screen and projector booth.

With the construction of the Chapel, Mr. Hamilton’s hopes for a truly “united” school were finally met. No longer having to give two duplicate talks – one for the Middle School and one for the Upper School – the Chapel also promoted a contemplative attitude, as overcrowding was now a non-issue. Indeed, the Hamilton Chapel provided the foundation of maturity and thoughtfulness that would come to define the school in the coming years.

Setting the Tone: Retrospection and Celebration

Related to second former Nicholas Hebard ‘21, Webb has recently been able to compare his knowledge of Belmont Hill in the 1960s to his present-day perception of the School. To Webb, Belmont Hill’s core principles, in addition to its general layout, have remained the same over the past fifty years: “As I come back and look at the School fifty years later…it doesn’t feel like a different school, it doesn’t feel like a different campus. As I walk around and look at the student body, it still is very intelligent, organized, and purposeful. It still is a very purposeful School, and of course I’ve known it for fifty years now, it’s still a very impressive School.” Webb’s comparison provides a testament to the continuing strength of Belmont Hill’s guiding principles; however, simultaneously, his quote fails to comment on the modernization and innovation the School has undergone; the marriage of tradition and change have defined Belmont Hill’s history.

Exploring the history of the Hamilton Chapel, we found great enjoyment in linking Belmont Hill’s past to its present. Sorting through older editions of The Panel, examining old photographs and documents, and discussing 1960s Belmont Hill with Mr. Webb all provided parallels to our current-day experiences, joys, and challenges at Belmont Hill. As we set the tone for Volume 66 of The Panel in the 95th year of the School’s existence, we hope this year will be one of retrospection and celebration. The Panel intends to include excerpts from older editions and articles this volume, providing the student body with an accessible means to investigate the nature of the Belmont Hill experience from 1923 until 2017. Additionally, with Dr. Melvoin’s announced retirement, we at The Panel hope to lead the school through the beginning of an important transition period. The process of both celebrating and reevaluating the past will be almost as important as pondering the future.